“Our customers have continued to operate their essential businesses at a very high level, despite significant challenges from the COVID 19 pandemic,” said Nate Jensen, senior vice president renewable fuels, Clean Energy. “This means that essential employees are able to get to work, refuse is collected every day, and goods movement continues uninterrupted throughout the U.S. Our customers have demonstrated their commitment to sustainable transportation by enthusiastically embracing our ultra-low carbon Redeem™ RNG. In response, we have significantly augmented our supplies of Redeem RNG and expect to provide ever-increasing volumes of the clean, sustainable fuel to our customers.”

Clean Energy’s Redeem was the first commercially available RNG vehicle fuel, derived from capturing the biogenic methane produced by the decomposition of organic waste from dairies, landfills, and wastewater treatment plants. Redeem reduces climate-harming greenhouse gas emissions by at least 70 percent, and even up to 300 percent depending on the source of the RNG, making it a negative carbon fuel.

Specializing in the transportation of food grade dry bulk commodities in the Western U.S., Food Express, Inc., based in Arcadia, CA has contracted Clean Energy to build a station in Maywood, CA that will deliver an estimated 4.7 million gallons of Redeem for its fleet of 60 RNG trucks. The deal also includes an operations and maintenance agreement for the station, which is expected to be completed by mid-2021.

“We’re pleased to work with Clean Energy on construction of a new fast fill station in Maywood, California,” said Food Express President Kevin Keeney. “Building a station that is dedicated to our fleet will provide more seamless access to ultra-low-carbon RNG and will further our company’s sustainable transportation goals.”

Pacific Green Trucking, Inc., which operates drayage vehicles in the Ports of Los Angeles and Long Beach, is adding 39 new RNG trucks to its fleet through the Chevron and Clean Energy partnership Adopt-A-Port program. In migrating from diesel fuel to RNG, Pacific Green has committed to an approximate 2.3 million gallons of Redeem.

“Switching trucks to fuel with Renewable Fuels is vital to improving air quality and fighting climate change in our country’s largest port complex,” said Greg Roche, vice president, Clean Energy. “We’re proud to see our partnership with Chevron on the Adopt-a-Port in action to put cleaner, carbon-negative trucks on the road and lessen the environmental impact on operations in the region.”

Waste Connections, the third largest waste company in North America, has inked a multi-year extended supply contract for an approximate 8 million gallons of Redeem to meet its growing RNG truck fleet needs. A long-term customer of Clean Energy, Waste Connections has expanded its fleet of 110 waste trucks to 100 percent RNG at its San Jose hauling company.

“RNG is a low-carbon alternative to diesel that provides numerous environmental and economic benefits,” said Paul Nelson, Division Vice President of Waste Connections. “Our RNG trucks perform well, don’t require significant infrastructure development, and support the broader environmental objectives of the customer base we serve. Fueling our fleet with Redeem provides us a long term GHG solution for the market and helps us achieve our corporate sustainability goals.”

Long-time Clean Energy customer Atlas Disposal, a waste hauling company based in Sacramento, has signed a multi-year extension contract for an anticipated 10 million gallons of Redeem across their two stations – Sacramento and San Jose.

“When it comes to alternative fuel technology, there’s no better solution than natural gas trucks from a performance, emissions and cost benefit perspective.  And when those trucks use RNG, it’s a game changer for the market,” said Dave Sikich, president, Atlas Disposal. “Being good stewards of the environment was one of the pillars on which Atlas Disposal was founded, so we are proud of our commitment to be a 100% RNG company across all our fleet operations. RNG is the best low-carbon solution for companies like ours.”

CR&R Environmental Services has renewed a contract for an anticipated 20 million gallons of Redeem to fuel 225 waste trucks at its Garden Grove and Perris stations. This volume is expected to increase as CR&R completes replacement of more diesel trucks in the coming years.

In San Juan Capistrano, CA, CR&R has inked an extended contract for an expected 9 million gallons of Redeem to power 125 RNG waste and recycling trucks.

Big Blue Bus, the transit agency that services one of the most environmentally conscious cities in Los Angeles County, Santa Monica, CA, has extended its Redeem fueling contract with Clean Energy for an anticipated 4 million gallons of RNG to fill its bus fleet, one of the largest in the nation. 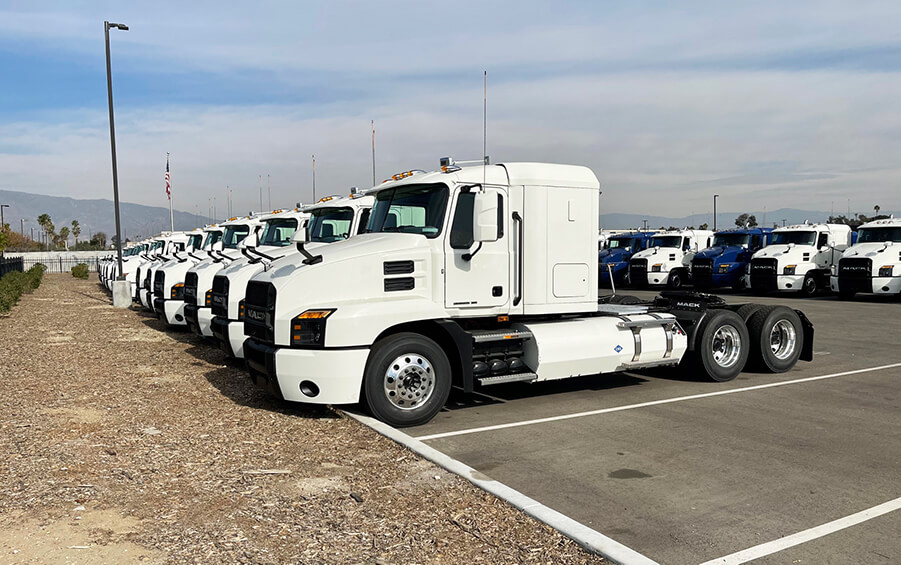 Linden Bulk Transportation LLC, a subsidiary of Odyssey Logistics & Technology Corporation, has added two new natural gas trucks to its fleet through Clean Energy’s Zero Now program. The offering brings the price of a natural gas truck at parity with a diesel truck, while offering a guaranteed fuel discount for the duration of the agreement.

The new CNG tractors will fuel with an estimated 20,000 gallons of CNG and are the first in Linden’s plan to add more natural gas trucks to the Odyssey fleet.

National Cement, based in Encino, CA, has purchased 15 new RNG concrete mixers through Clean Energy’s Zero Now program, with a multi-year fuel agreement for an anticipated 675,000 gallons of Redeem.

The Town of Smithtown on Long Island, NY has again required the use of natural gas refuse trucks in its city refuse franchise and signed a corresponding term extension for Clean Energy’s fueling services. Clean Energy has signed Zero Now agreements with the four new solid waste and recycling companies serving the Town, including Alpha Carting, T&D, Total Collection and Winters Bros., for a total 22 trucks with a multi-year fueling contract for an estimated 1.3 million gallons of natural gas.

Clean Energy has signed a supply agreement with AmeriGas for an anticipated initial 1.1 million gallons of fuel which is expected to grow substantially in 2021 and beyond. AmeriGas has several customers in Mexico for industrial use purposes as pipeline gas is not readily available.

U.S. Concrete has signed a fuel agreement for 360,000 gallons of CNG at Clean Energy stations within the five boroughs of New York City to fuel 42 of its natural gas ready mix trucks.

The City of Surrey, B.C., Canada, recently announced the completion and commissioning of a new natural gas station. This station, which was built and will now be operated by Clean Energy, will fuel the City’s natural gas municipal vehicle fleet using an estimated 250,000 gallons of natural gas.

Livermore Sanitation in California has signed an agreement for a station upgrade and operations and maintenance services to power its fleet of 40 natural gas trucks.

The City of Mesa, Arizona signed a multi-year contract with Clean Energy for an anticipated 800,000 gallons a year to fuel 80 refuse and other City trucks.

Clean Energy Fuels Corp. is North America’s leading provider of the cleanest fuel for the transportation market. Through its sales of Redeem™ renewable natural gas (RNG), which is derived from capturing biogenic methane produced from decomposing organic waste, Clean Energy allows thousands of vehicle fleets, from airport shuttles to city buses to waste and heavy-duty trucks, to reduce their amount of climate-harming greenhouse gas by at least 70% and even up to 300% depending on the source of the RNG. Clean Energy can deliver Redeem through compressed natural gas (CNG) and liquified natural gas (LNG) to its network of approximately 540 fueling stations across the U.S. and Canada. Clean Energy builds and operates CNG and LNG fueling stations for the transportation market, owns natural gas liquefication facilities in California and Texas, and transports bulk CNG and LNG to non-transportation customers around the U.S. For more information, visit www.CleanEnergyFuels.com.

Clean Energy Appoints Karine Boissy-Rousseau to Board of Directors

The more we know about you and your business, the better we can accommodate your individual goals and needs. Please answer a few questions about your business and interests, and a Clean Energy sales representative will get back to you soon.