Enter your email address to subscribe to this blog and receive notifications of new posts by email.

What role do you see transit playing in sustainable communities?

Public transit is the backbone of a sustainable community.  APTA recently reported that more than 2.7 billion trips were taken on U.S. public transportation in the second quarter of 2014.  These are the trips that make communities thrive and we’re seeing more of these trips being made on increasingly cleaner fuels.  Each year the 27 million passengers of The City of Los Angeles Department of Transportation(LA DOT) ride in buses fueled by renewable natural gas called Redeem.  This fuel can slash GHG emissions by as much as 90 percent compared to gasoline and diesel, and is derived entirely from organic waste.  As America’s cities depend more heavily on public transit it is imperative we meet this rising demand sustainably.

What renewable fuel possibilities are emerging for public transit?

Landfill methane capture has long been a priority for the EPA.  According to the EPA, municipal solid waste landfills are the third-largest source of human-related methane emissions in the United States and, “…represents a lost opportunity to capture and use a significant energy resource.”  One year ago we launched the first commercially-available renewable natural gas called Redeem which is derived from landfill methane and other organic waste streams.  We’ve seen a growing number of transit agencies such as LA DOT take advantage of this 100 percent renewable fuel to power its transit buses.  This is sustainability in action: a city’s refuse used to fuel the buses moving its citizens.

What is Redeem renewable natural gas and how is it made?

Redeem is derived from biogenic methane, or methane that is naturally generated by the decomposition of organic waste collected at landfills, waste water treatment plants  and agricultural operations. When we capture and use this methane as a vehicle fuel rather than allowing it to escape into the atmosphere, it can actually result in a negative carbon footprint.  As an example, a fleet that consumes 1,000,000 gallons of gasoline per year can reduce their greenhouse gas emissions by approximately 9,700 metric tons by switching to Redeem, which is the equivalent of taking 1,940 passenger cars off the road. 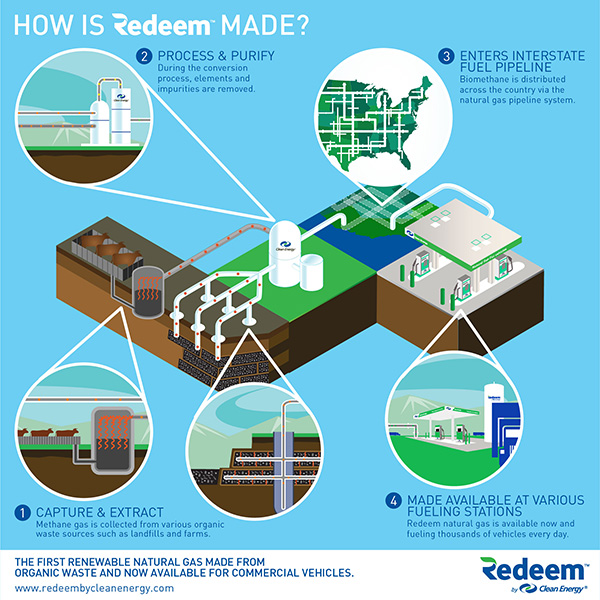 How can communities get involved?

Our hope is that communities can get involved with the cleanest fuel commercially available simply by riding the bus.

Everyone can and should take part in building sustainable communities.  Walking, riding a bike or taking public transit all have tremendously positive impacts on the air we breathe.  Communities and transit agencies continue to provide innovative green transit options.  Clean Energy is regularly adding additional landfill methane sources and Redeem sourced from other organic waste streams to its roster of supply sources which means we can provide even more Redeem renewable natural gas to fleets.  Our hope is that communities can get involved with the cleanest fuel commercially available simply by riding the bus.

The more we know about you and your business, the better we can accommodate your individual goals and needs. Please answer a few questions about your business and interests, and a Clean Energy sales representative will get back to you soon.